Note from the Author
Readers may have noticed a months-long interruption in this blog. That’s because life got in the way. Or rather, death. There occurred the last illness and death of a loved one, followed by all that must be done after someone dies, and that was a demanding time. Afterward, as so many caregivers do, I got sick. But now the green blade riseth again, and I am well, and I hope you will excuse my temporary absence and enjoy the future with me.

A friend from California said to me that we in Enchanted Habitat are strange in that we keep goods in the refrigerator that don’t need to be there. “Like what?” I said. “Sugar, flour, baking soda, shortening,” (Californians don’t say Crisco). “Shall I go on?” she said.
“But those do need to be refrigerated! They’ll spoil,” I said. Then I said, “At least they might get stale. And no bugs can get to them in the refrigerator.”
She gave me a look that said the West Coast equivalent of, “Bless your heart,” and we left it at that.

Afterward I thought about it, and the next time I bought a pound of flour I tried putting it in a container on a shelf in the pantry, but I just couldn’t do it. All of my people have put everything they could in the refrigerator, dating from the time they got refrigerators. Which hasn’t been that long ago, depending how old you are. 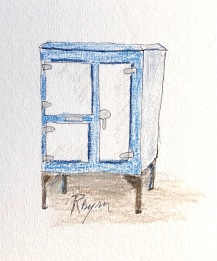 Some of us are still around who forget and say icebox when we mean refrigerator.  I remember The Ice Man coming with huge blocks to stock the icebox when I was maybe five.

A wrinkle in time.

The Ice Man. Out of a storybook. Awesome in the original meaning of the word. Drove up in a covered truck filled with 50-pound ice cubes sitting in clean wet orange sawdust. Big man, because he had to be. 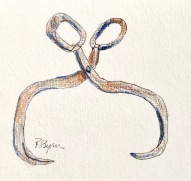 Wore tall wet black rubber boots. A wet brown leather shield covered his back as protection from the blocks of ice he gripped with iron tongs as long as I was, and slung over his shoulder.

Almost back to now.

You know that old hand-me-down icepick you keep in the very back of your kitchen junk drawer so you won’t stick yourself with it? 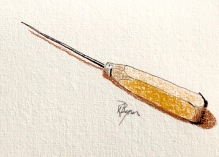 That thing you use two or three times a year to punch holes, and retrieve small items that fall into crevices, and such, and you would no more throw away than you would a holy relic? There was a time somebody used that to chip ice.

Back to the future.

So yes, if you come to my house and want to bake or fry anything, go first to the refrigerator.

From The Creatures Gazette: Rabbit Outruns Dog Every Time

Most nights, in the backyard, comes a rabbit. I think she wants the dog to chase her.  Bunnybunny always wins by many lengths. I swear she enjoys it.  She is faster, and also she has a strategy.

She waits until the dog discovers her, and then runs toward the dog, then makes a sharp turn and circles back and races the whole length of the yard in a full-out, foot-thumping, dog-gasping contest. The dog is always far behind. Bunnybunny exits the yard through a little hole in the fence and disappears into the neighbor’s yard. The dog participates in this non-match with all her heart, same thing over and over, many times a week, and when it ends she is stoic each time. I think she should get a medal for dog-ness. Doggedness.

But aha! one night there was also a guest dog. Two dogs. Guest Dog is half Beagle, half Terrier, but at least this night she was less than the best example of her breeds. She is not the one who “scared up” (as we say here) the rabbit; Home Dog did. When the noisy chase began, and all the way through it, Guest Dog stood around still sniffing things, trying to get information through her nose about what was happening. The rabbit did not believe this could happen: near the end of the chase, with Home Dog far behind as usual, Bunnybunny ran smack into Guest Dog. They were both knocked for a loop. Bunnybunny recovered quickly and left the yard. Guest Dog got up slowly and headed for the house.

The Dirt on Dirt, Please

Have you ever read about the latest archeological dig/discovery that’s gonna redefine history as we know it, and wondered: How do these places get covered up in the first place? where did all that dirt come from?

I don’t mean dirt that already exists and is displaced and pushed around by such as glaciers or dust storms or earthquakes. I mean new dirt. Dirt that somehow made its own self, and over time accrued in such amounts as to bury whole cities; what is that dirt made of? 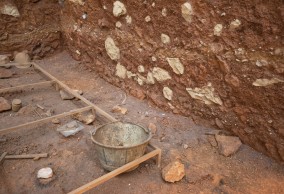 What is the origin of dirt?
We all have personal experience of dirt coming mysteriously from nowhere and accruing. I deal with this most notably because it accrues under the little feet-pads of my computer mouse, which then drags. About twice a week I turn the mouse over and scrape its little feet with the letter opener and end up with a tiny pile of detritus of a dark neutral color. But surely, even after a hundred centuries, this kind of micro-particle debris could not account for the burial of Gobekli Tepe. So what does?

Off the top of my head I made a list of some candidate ingredients that might decompose together over a long time and constitute dirt. I will only name some here. The list starts out okay with, “pollen, dust,  human and dog hair,” but then the items tend to get disgusting, beginning with, “dandruff, dead dust mites,” and, believe me, other bits of life you don’t want me to name. But my list would not make enough dirt to matter, even with an addition nominated by my California friend: the item frust, which according to the Urban Dictionary is the small line of debris that refuses to be swept onto the dustpan and keeps backing a person across the room until she finally decides to give up and sweep it under the rug.

So if any readers know the answer to the mystery of dirt, kindly enlighten the rest of us.

This is my season for scarcity of home-grown garlic. It’s early Spring and other plants are burgeoning everywhere, but when I go to my pantry and take the lid off my terracotta garlic house and look to see what’s left: naught but two or three cloves. And a long time before I can replenish. Mid-June at the earliest is when the local backyard gardeners harvest. Meanwhile, I’ll get only grocery store garlic. Clean and white, yes, not a speck of dirt in their controlled-looking little roots. But not as clever in the tasties. 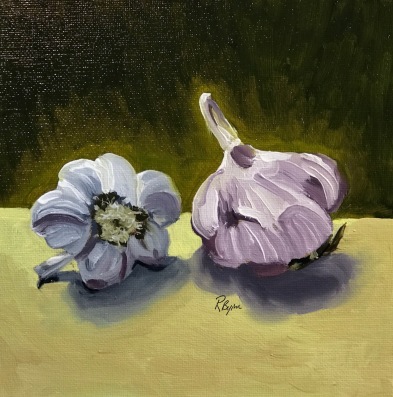 10 thoughts on “Ice Boxes and Refrigerators”